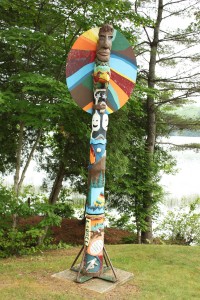 According to Wikipedia, a totem is “is a being, object, or symbol representing an animal or plant that serves as an emblem of a group of people, such as a family, group, lineage, or tribe, reminding them of their ancestry.”  Camp Laurel has had four different totem poles that have symbolized our camp spirit.  The first, “Herman,” looked over the camp in its early years and stood on the Acadian Lawn near the Whippoorwills’ cabin.  By 1978 Herman began to show signs of decay and was safely taken down at the end of the summer.   A part of Herman was burned in the Opening Campfire of the summer of 1979 and a new totem pole was commissioned.  Counselor Randy Watts from Colorado, experienced in wood working and 3-D design, was tasked with creating a new “spirit” for the camp.

With a cedar tree trunk lying on sawhorses, wood carving wedges and a box of crayons and chalk, Randy began the project.  He sketched rough drawings on the trunk and instructed campers and staff how and where to cut.  Most everyone in camp that summer took a turn with the tools and there was a fair degree of uncertainty as to how the final product would look.  Incredibly, by the end of the summer, our new totem pole, “Allen White Cloud,” was standing on the beach looking up toward Tanager, the Dining Hall.  Randy named the totem pole after a camper from his cabin, Allen Pantuck, and a horse, White Cloud, that had been at camp that summer. 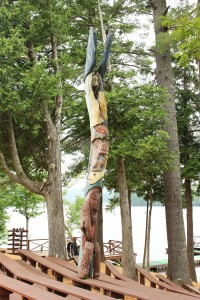 Randy returned to Laurel in the summers of 1980 and 1981 and with the help of the campers and counselors carved two more poles. “Excelsior,” (NYS’s motto – ever upward) shows a person climbing to the top of the pole.  Randy actually lay down on the pole and we traced his body to be carved into the design.  Excelsior has a riddle carved into it with the answer being the location of a time capsule prepared by the campers to be opened in the new millennia.

“Ralph” sits atop the camps’ Cove and watches out over all the camp meetings.  Ralph is a traditional totem pole with native animals in its design.  Again, campers and staff worked together under Randy’s guidance to carve the pole.  On his own Randy used an axe to carve an old tree trunk in cove into a face known as the “Spirit of the Cove.”

This past spring, Excelsior’s base was found to be rotten and it had to be taken down.  In keeping with tradition, we burned a piece of Excelsior in our opening campfire on the first evening of the summer.  Perhaps we will begin work on a new totem to let the “Laurel spirit live on, and on…”