College Days is a classic Laurel tradition, and probably the most all-consuming one. For four days, pretty much every camper, every counselor, every venue, every program area plays a role. The event has changed over the decades, evolving to become even more exciting and engaging.

For the last few years, campers have been divided into two teams, which makes more sense logistically than the three we used to have, and is much easier than the four we tried at one point. The Super Seniors seek to pick two colleges or universities that have some connection, say geography or history. Fans of the NCAA men’s basketball tournament probably recognized that this year’s two teams, Davidson and Gonzaga, both gained national prominence through their unexpected success in March Madness. 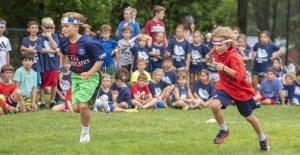 Part of the fun of College Days for the campers is to guess when it will start. The break from normal activities involves the appearance of something unexpected at Camp, whether a hot air balloon and a motorcycle club, like this year, or announcements dropped from a plane. Because the break has become such an anticipated event, we sometimes stage a dramatic event around the time when campers expect the break, just to kid around. This summer,  a professional team of fire-twirlers on the upper fields at dusk was just a cool evening program (and “fake break”), not the start of College Days!

Almost every full-season camp has a color war or other departure from the norm near the end of the season. The Laurel version diverges from the ones seen at many other camps in two key ways. For one, our team competitions extend to every activity, so campers can show their stuff not just in basketball and soccer, but in checkers, and not only in water-sports but in the arts, through competitive lip-syncing, cooking, and painting. In addition, Camp friendships are paramount at Laurel, and remain so during College Days.

Right now, Laurel campers are enjoying College Days as Laurel campers have for many decades, throwing themselves into team competitions while upholding Laurel values. While they play to win, we always come together as one big Laurel family at the end.