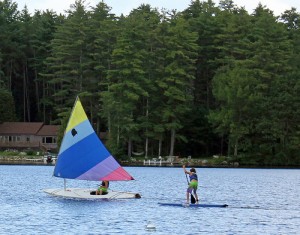 The unseasonably warm and pleasant weather seems to be bringing on summer faster.  The flowers are blooming, the birds are back, and the days are sunny. It’s hard not to take advantage of the opportunity to prematurely engage in all of one’s favorite summer activities a little bit.  The other day, my sisters and I caved.  We decided to rally my niece, go to the park and, yes, even though three of the four us fully qualify as grownups, play on the playground.  I’m convinced that no matter how old one gets, no one ever gets tired of swings.  It turns out that we weren’t the only ones with such an idea.  The place was packed, children and adults everywhere.  The park had even opened up the boating dock, something that they usually don’t do until Memorial Day Weekend.  People were out on the lake in rowboats and paddle boats.  They were picnicking.  They rode by on bicycles, skates and skateboards.  The comforting familiar smell of campfire from the nearby campground even permeated the air.   It was as if 2012 had transposed May and March.  My niece and I managed to score the last two remaining swings while my sisters preoccupied themselves on the monkey bars.

My niece and I have this game we play.  We see who can swing the highest.  The little boy between us apparently thought our game looked fun because he joined in.  As we slowed down for a bit after tiring ourselves out, he started a conversation.  I think he actually wanted to talk to my niece but decided I’d make a good mediator—at least in the beginning.   His name was Hunter.  What is her name?  Angelica.  How old is she?  She is six.  Same as me, he said.  What grade in she in?  First.  Same as me, he said again.  He jabbered on.  His dad had told him that if he was good they might rent a paddle boat later.  Maybe Angelica could come on the paddle boat with him.  He wished the concession stand was open so he could get ice cream.  Earlier in 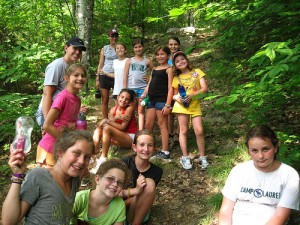 the day he’d gone to his swimming lesson at the JCC.  Then his mom signed him up for camp there this summer. I perked up.  Every now and then, chance throws a writer a bone and you have to grab it and run with it. Camp, huh? Do you stay overnight at this camp?  No, I’m not old enough.  I didn’t tell him that I already knew this.  The minimum age for most overnight camps is seven.  Is this your first time at the camp?  Yes, my sister went last year.  She said it’s really fun.  What do you think will be the most fun?  Ummm…I don’t know.  I don’t really know what we do there.  I bet you swim there.  Yeah, I think we do.  I worked at a camp.  You did?  Yep.  Only everyone stayed overnight at my camp.  His eyes grew.  They did? Yep.  I think I would like to do that someday.  Was it fun?  Yep.  What was it like there?  I looked around at the bicycles and the boats.  I took in the smell of campfire in the air and listened to the sound of all of the children playing and laughing.  It’s a lot like this.  I think I would like that, he said.  Hunter had no idea that he made my day and helped me out a lot by literally handing me material for a camp blog.  I hope he has fun at the JCC camp this year…and that he makes it to overnight camp someday.  If you haven’t thought about sending your children to camp, take a trip to your local park on a nice spring day.  Your senses just may help the decision become clear.